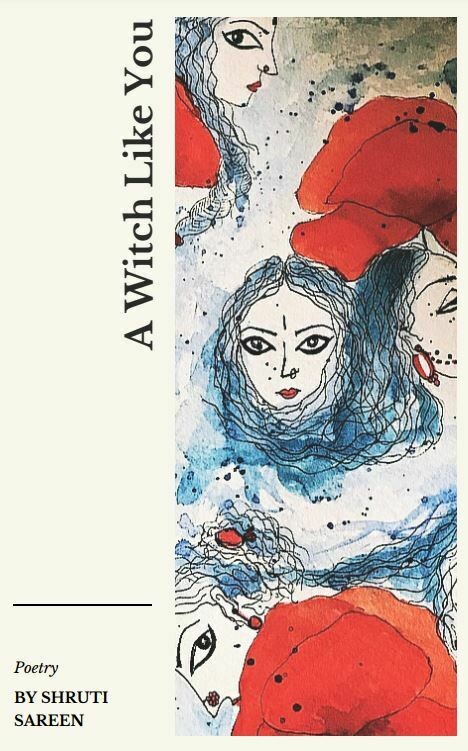 Shruti Sareen (found as Shruti Krishna Sareen on social media), was born and brought up in Varanasi. After studying at Rajghat Besant School, KFI, she graduated in English from Indraprastha College for Women, University of Delhi. She later earned a PhD in 'Indian Feminisms in the 21st century: Women's Poetry in English' from the same university which is now forthcoming as a book from Routledge in 2022. She has had over a hundred poems and a handful of short stories published in journals and anthologies. She also teaches English Literature and Language. She is currently seeking publishers for her novel, The Yellow Wall. A Witch Like You, is her debut full-length poetry collection. She was an invited poet to the International Poetry Festival, Poesia-21, hosted by Russia (March 2021). She is currently working on a hybrid manuscript around the lives of queer writers and artists. Her passions and interests are best represented by the poems in this collection.

The title ‘A Witch Like You’ appeared to me in a dream at 3am. This is also a phrase in the last of the ‘Dream’ series poems in this book. The title means to be bewitched by someone, whether good or bad, right or wrong, to be entranced, and intoxicated by a woman. A mixture of intense love and intense pain led to this ambiguous word “witch”, which has both positive and negative connotations. The political poems in this collection too are also decidedly wicked, and yes, all the influence of the wicked, witchy woman.

The poems in this collection are arranged in the form of a story- adolescence to falling in love, to intense loss and deep depression, and finally, through acceptance, to some sort of release.

This book might have been out sooner, but a long period of depression, followed by PhD submission, kept me occupied. I would like to thank poet-friend Souradeep Roy, who provided me the much needed incentive by telling me that my poems are worthy of a collection and should be produced as one. Also another poet-friend, Shalim M Hussain, who tried to help me cut the manuscript into half, but decided there were too many good poems to be able to achieve that goal. He told me- “I don’t know what you have been through, but some of the love poems are just so beautiful”. I consider that a big compliment.

My thanks are definitely due to Russian-American poet- Philip Nikolayev, who has given me support, encouragement,
exposure, opportunities, criticism, advice and suggested edits.

I would like to sincerely thank my editor, Devika Brendon and publisher, Anna Forsyth / Girls on Key, for their input and
contribution into making this collection what it is.

I would like to mention Kriti Sharma, whom I got to know through poet-friend Mihir Vatsa, who helped in a rough conceptualisation of the cover. I am indebted to my friend, Abhipsa Chakraborty, for wonderfully enhancing and actualising my idea in the form of the cover painting.