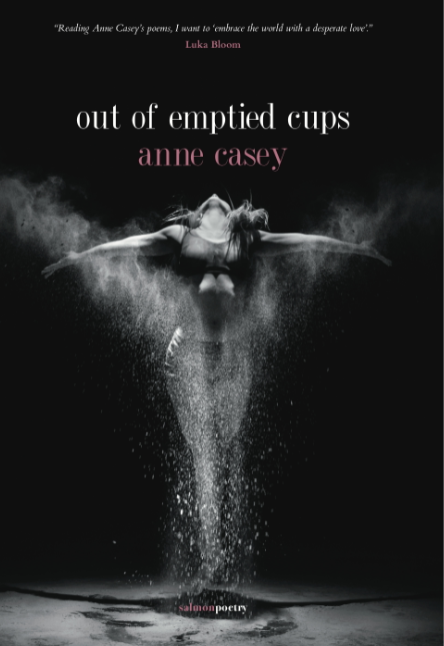 out of emptied cups explores what it means to be human—a consciousness contained within a shell that dictates so much of what our experience of life will be. Including internationally award-winning and shortlisted pieces, these strongly felt poems interrogate what it means to be a woman in a world where the female body still preordains so much for the person it contains. Deliberately weaving in and out of, and cross-referencing, each other, these poems reveal multiple perspectives on the same or related narratives.

At times unabashedly political, this book plumbs the poet’s own experiences of birth, death, loss, treatment/mistreatment and place in the world—as a woman, as an immigrant, as a parent, as a former environment journalist/author depicting the decline of our planet, as a human being questioning our treatment of others based on lines on a map and ‘so many lengths/of slick red tape’.

Collectively these poems strive to cross the boundary between body and soul. To be filled to overflowing. Emptied. To be simultaneously half-full, half-empty. To drink deeply of this one precious cup and find meaning in the traces of what remains—“lifting our hearts/out of emptied cups/and away with them/into the heavens'.

Awards and recognition for poems in this book

‘if I were to tell you’ won 1st Prize in the 2018 Alice Sinclair Memorial Writing Competition (Fellowship of Australian Writers - Lake Macquarie/NSW, Australia).

‘All Souls’ was Highly Commended in the Fellowship of Australian Writers Queensland Literary Competition 2018.

‘Portrait of a woman walking home’, ‘you have to be tough to be a man’, ‘PLEASE DO NOT FEED THE ANIMALS’, ‘crush’, ‘for all the #MeToos’, ‘Dear son’ and ‘Still I rise’ were shortlisted for the Overton Poetry Prize 2018 (UK).

‘nothing happens in the burbs’ was shortlisted for the Galway University Hospital Arts Trust Poems for Patience Competition 2019 (Ireland).

‘in a sunburnt country’ was longlisted for the University of Canberra Vice-Chancellor's International Poetry Prize 2018 (Australia).

‘a great mirror’, ‘cup in hand’ and ‘All Souls’ were finalists in the Summer Literary Series 2018 Fiction; Poetry Contest (Canada).

‘All Souls’ was longlisted for the Bedford International Writing Competition 2018 (UK).

‘burnt offerings’ was Poem of the Week on HeadStuff arts hub in May 2018 (Ireland).


About the author
Originally from the west of Ireland, and living in Sydney, Anne Casey is an award-winning poet and writer. Over a 25-year career, she has worked as a journalist, magazine editor, media communications director and legal author. Anne is Senior Poetry Editor of Other Terrain and Backstory literary journals (Swinburne University, Melbourne). Her writing and poetry rank in The Irish Times newspaper’s Most-Read.