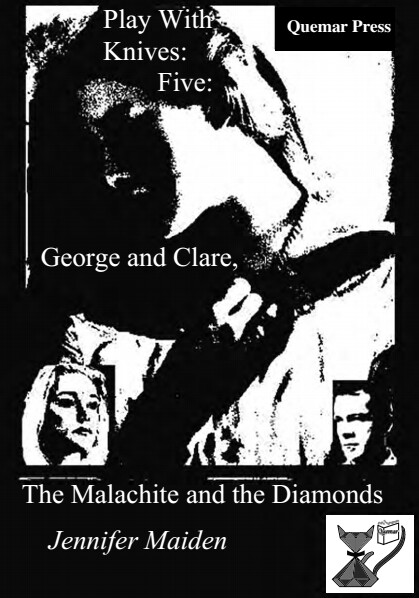 The last novel in Jennifer Maiden's Play With Knives Quintet, George and Clare, the Malachite and the Diamonds experiments across poetry, prose, style, person, action and sense of self.

Clare was the central character in what the Oxford Companion to Australian Literature calls Maiden's 'impressive' first Play With Knives novel. Set in Sydney's Western Suburbs, it was first published in 1990, and centres on Clare and George's survival as Clare is released from prison. The Quintet outlines the growth of these characters.

Play With Knives: Five: George and Clare, the Malachite and the Diamonds balances between dichotomies, places (the Sydney Western Suburbs and Russia), forms (prose and poetry), victim and killer, tangible and intangible levels of reality. In this novel, analysis comes from a two-fold nature of experience. Ultimately, Clare, who murdered her siblings as a child, speaks to her partner and former probation officer, George, about their infant son: 'I dreamed that I'd had another dream about killing him - Coleridge is right about human experiencing being "double-touch" - and that I told him about it and that he just looked at me quietly with his understanding quiet eyes'.

While Coleridge spoke of an internal experience of sensation, a wider sense reminiscent of this 'double-touch', runs throughout this work. Here, someone is able to experience something in a doubled state, as participant and spectator. George and Clare speak intimately across two countries, and the story itself takes place across third person poetry and first person prose.

One aspect of duality never seems to be minimised for another. Mount Druitt, a Western Suburb of Sydney, with transparent conversations and shop lights at night, is as vital to this story as Russia, with political drives and constant snow, where cityscapes and landscapes have the same colour as the malachite beads worn by Clare and the woman she is trying to rescue.

In Mount Druitt, Clare and George, now human rights observers, are implored by a friend to rescue her daughter, Quentin - a young arms dealer who has been taken to Russia by her husband, Schmidt, a sinister telecommunications figure dealing in silicon-impregnated quantum diamonds, assets prized by national forces.

Quentin herself is prized by Australian government and security forces, for her contacts and skill in selling arms. The sharp-focused study of topical events is also a dualistic process: political strategies and analysis both surround the characters and affect them directly, from the creation of the new Russian war cabinet, to Novichok, to political isolation and survival, to staying in a Russian summer house with a Russian journalist, a member of Russian undercover police, and a Saudi agent, with Australian and Ukrainian mercenaries at the gate.

On another level, intricate third person poetry shows things known and unknown in spaces where there is always overview, and something immediate can be internal or spiritual, an intrinsic explicit love scene, or a space where Clare can survive, reassuring herself that her murders are not forgiven or compartmentalised.

Whether in Russian winter light, or the light of a Mount Druitt mall at midnight, this work experiments to create platforms where aspects of reality or experience can integrate, as they move between a sense of self and overview, between action and the ability to transcend it.