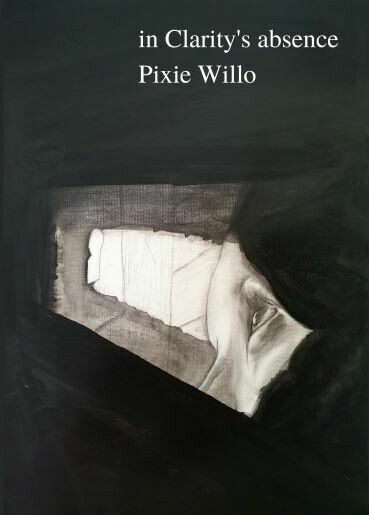 SKU 00144
AUD$20.00
In stock
1
Product Details
In Clarity’s absence is a bi-polar magical mystery tour through multiple worlds - heavens, hells, deaths, rebirths, and angelic realms - exploring transformation throughout.
We are all multidimensional beings. Willo gets it and writes masterfully.
A mind of untapped timeless wealth...
Lost in rhythmic mists
Where rivers flow
With words––her gift

These are the fine fruits of a rhythmical lyricist

The genius in Pixie's work is her capacity to stay vulnerable and open to the unknown.
She’s the literary offspring of Sappho and Walt Whitman, with just a whiff of the Marquis de Sade…

- Jane Lipman, author of On the Back Porch of the Moon. winner of the 2013 New Mexico- Arizona Book award in poetry and The New Mexico Press Women’s award in the same year. Also, author of two other poetry books ' The Rapture of Tulips' and ' White Crow's Secret Life'

Pixie Willo is a writer, reviewer, voice actor and performance poet from the Blue Mountains, Australia.

In 2016 Pixie began working as a theatre reviewer and interviewer for the Stages theatre show for 2ser FM; as well as creating audio packages for 2ser’s Gay Panic show, interviewing queer and diverse people in and around Sydney and the Blue Mountains. She currently works as a creative writer for Entertainment Blue Mountains.

Much of her work is written for performance. Pixie runs the Off-Beat poetry slam in the Blue Mountains and was a finalist in the 2013 National Poetry slam. Her work has also been featured in Mad Poetry, Blue Poets and Bahaus Blue Mountains
magazine.

Pixie’s voice acting credits have included narrating for History Lab, Starship Sofa, Queerstories, Let’s Do It and Antipodean SF’s Beam Me Up podcast, for which she has also written material. Pixie has had two plays chosen for the Short and Sweet playwriting festival - Merging Shadows in 2017, and Model Girlfriend in 2018.

She holds a BA in Theatre, Performance and Creative Writing from the University of New England. Since the COVID-19 pandemic, Pixie has been able to use her time to focus on writing poetry. What initially began as an emotional outpouring, eventually became a collection of over sixty-five poems.

Her work is deeply personal and autobiographical graphical chronicling her journey as a queer writer. There are many tones, shapes and voices that flow through her words, each marking a significant space in time. When Clarity leaves, words pour through the gaping cracks in search of truth.